A Quick Look at Sexual Harassment in the Workplace 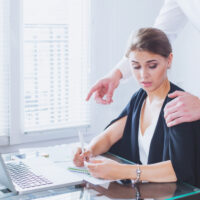 Quid Pro Quo – This Latin phrase basically means that something is being offered in exchange for sexual favors or a dating relationship. This type of harassment is perpetrated by a supervisor or manager, or someone in authority over a subordinate. The supervisor may offer favorable job treatment in return for compliance, such as a raise, promotion or plum assignment. Likewise, the supervisor could threaten negative consequences for failure to comply, such as reassignment or even termination.

Hostile Environment – The hallmarks of a hostile work environment are unwelcome conduct of a sexual nature that is both severe and pervasive. The employee must personally feel harassed, and this feeling must be objectively reasonable. Examples of unwelcome conduct of a sexual nature could include groping, touching, ogling, making suggestive comments, telling dirty jokes, inappropriate notes or emails, or the presence of graffiti or adult material.

It is important to understand that both forms of harassment can be committed by a male upon a female, by a female upon a male, or by males or females upon members of the same gender.

What Employers and Employees should do about Workplace Sexual Harassment

Employers – It is vital to have a policy in place that clearly defines what type of behavior is not permitted in the workplace, and the consequences for such behavior. The policy should include a procedure for workers to file complaints, and it is important to have a by-pass procedure in case the worker needs to complain about the person who would normally receive the complaint. The policy should be clearly communicated to employees and supervisory staff, who should be trained on how to handle complaints and conduct investigations. At the end of an investigation, a decision should be made, and that decision should be communicated to the complainant. Confidentiality should be respected throughout the process to the extent practicable.

Employees – If you feel that you are being or have been subjected to sexual harassment, make use of the company’s complaint process, if there is one. If there is no policy or if the procedure was unsatisfactory, you can file a complaint with the Equal Employment Opportunity Commission (EEOC) or the California Department of Fair Employment and Housing (DFEH) within the relevant deadlines. You may also file a claim in state or federal court after exhausting these procedures. If you experience sexual harassment in the workplace, to protect your rights, we suggest you contact a lawyer who specializes in employment law immediately.

For policy review or development or staff training on sexual harassment, or for help filing a sexual harassment claim with a government agency or in court, call the Bay Area employment lawyers Richard Koss and Rand Stephens at 650-722-7046 on the San Francisco Peninsula, or 925-757-1700 in the East Bay.