What to Know About California’s Fair Pay Act? 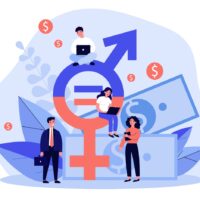 In 2016, California put into effect the Fair Pay Act. The Act was intended to give employees an easier path for claiming unlawful pay discrimination, including by expanding the understanding of when two employees should be considered equal, and by protecting employees who want to talk about their wages with co-workers in order to ensure their pay is fair. Continue reading to learn about the important aspects of California’s Fair Pay Act. Speak with a seasoned California employment discrimination attorney with any questions or for help with an employment-related matter.

California’s Fair Pay Act went into effect on January 1, 2016. The Act amended the California Labor Code to protect employees who want to discuss their wages with their co-workers and narrowed the defenses available to employers responding to claims of unequal pay. The law was designed to ensure that men and women who perform substantially similar work, as well as workers of different ethnicities, are paid equal wages.

What is “Substantially Similar?”

Under the Fair Pay Act, an employer who pays two employees different wages for “substantially similar” work must have a neutral justification for doing so. The difference must not be based on the genders of the employees.

Before the Act was passed, employers could get outside of pay discrimination charges by pointing to slight differences in the employees’ titles and job duties. The Fair Pay Act focuses instead on the nature of the job and whether the two employees perform “substantially similar” work, based on factors including job responsibilities, skill, effort, and working conditions. An employee may now bring a claim of pay discrimination even if they have a different title and work in a different location to another employee receiving higher pay, provided their jobs are substantially similar.

When are Different Wages Justified?

Employers are not required to pay all employers equally, even if they perform the same or similar jobs. However, the employer must have a neutral, nondiscriminatory reason for paying employees differently. Appropriate reasons for differences in pay may include:

If you are a San Francisco employee or employer in need of advice or representation concerning wage and hour, wrongful termination, workplace discrimination, or other California labor law issues, contact the Bay Area employment law attorneys Richard Koss and Rand L. Stephens at 650-722-7046 on the San Francisco Peninsula, or 925-757-1700 in the East Bay.