Equal Pay Violation in CA: Is My Employer Violating the EPA? 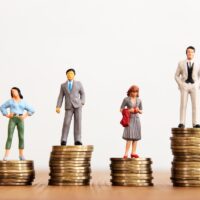 California’s Equal Pay Act (EPA) prohibits pay discrimination based on race, ethnicity, or gender. The EPA is intended to put a stop to unequal pay between men and women, as well as between workers of different races or ethnicities. If you are being paid less than your white or male counterparts, you might have a claim under the EPA. Proving an EPA violation, however, requires satisfying certain elements. Additionally, it’s important to watch out for other types of EPA violations. Read on below to learn about how the EPA operates and whether you might have an EPA claim against your employer. Call a dedicated California wrongful termination and retaliation lawyer with any questions or for help with an employment-related matter.

The Equal Pay Act requires California employers to pay employees the same for “substantially similar work.” Specifically, employers may not pay an employee less than employees of another race, ethnicity, or gender for substantially similar work. If you have the same job responsibilities as another employee who is of a different gender or race and that employee is being paid more, you might have an EPA claim.

In evaluating whether the work is substantially similar, the courts look to the actual job responsibilities and work performed, not formal titles. The work need not be equal, and the employees need not even be in the same location.

Moreover, an employee need not show systemic discrimination across the workplace to have an EPA claim; it’s enough for one employee to show that they are being paid less than an equivalent counterpart of a different race or gender. An employee may, however, bring a California EPA class action on behalf of all similarly-situated employees. There is also a federal EPA, although California’s protections are broader for employees.

The EPA does not, of course, mandate that all employees of a company are paid exactly the same. The law only requires that employees who perform substantially similar tasks are paid the same. There are certain permissible grounds for paying employees differently, however, even if they have roughly the same job duties.

According to the law, employers may pay similar employees differently so long as the pay differential is based on at least one of the following:

A bona fide non-race factor only applies if there is a “business necessity” for the disparate pay, and there is no better, alternative business practice that meets the same goal and corrects for the pay differential. For example, giving a larger salary to a new recruit to pull him away from a competitor would not be a proper justification for paying a new male employee more than a female employee doing the same job.

If an employee proves they are being paid less than a similar counterpart of a different race or gender, the employer then has to show there’s a lawful explanation. If the employer shows one of the above reasons for disparate pay, the burden then shifts back to the employee to prove that there is a different, unlawful reason for the pay discrepancy (i.e., that the neutral reason is actually a pretext for discriminatory intent).

California’s EPA includes several provisions intended to protect employees against undetected equal pay violations. Employers are not allowed to enforce policies restricting employees from discussing their salaries or wages with other employees. Freedom to discuss your compensation with your co-workers allows you to identify any unlawful pay gaps. You are not required to tell your co-workers how much you make, but your employer cannot prevent you from doing so if you so choose. Federal law also prohibits employers from restricting employees’ rights to discuss their wages.

Your Prior Salary Is Your Business

While your employer cannot prevent you from discussing your salary with your co-workers, your prior salary is your own business. Your employer is not allowed to ask you about your previous compensation and benefits before you worked for them. Moreover, you cannot be paid less because you earned less at your last job. The purpose of these protections is to prevent employers from reducing salaries based on the “market rate.” If you are interviewing for a job, the interviewer is not allowed to ask what you are currently making; they can only ask what you hope to be paid now.

If you are a San Francisco employee or employer in need of advice or representation concerning equal pay violations, retaliation, whistleblower protections, workplace discrimination, or other California labor law issues, contact the Richard Koss Bay Area employment law attorneys at 650-722-7046 on the San Francisco Peninsula, or 925-757-1700 in the East Bay.