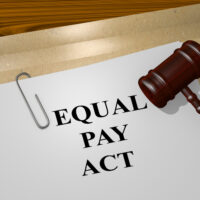 California Gov. Jerry Brown recently signed two pieces of legislation which will increase the legal protections of employees in California: SB 1063, designed to prevent race-based disparities in pay, and AB 1676, which amends the Labor Code to include that “prior salary shall not, by itself, justify any disparity in compensation.” Both updates will enter into effect on January 1, 2017.

SB 1063, also known as the Wage Equality Act of 2016, extends the 65-year-old Fair Pay Act protections to people who are of a different race or ethnicity, expanding the law beyond its current protections based on gender. The Fair Pay Act was itself updated in October of 2015 to increase its protections for women in the workplace. Those changes went into effect on January 1, 2016.

The biggest change is under the Wage Equality Act, where employees performing “substantially similar work,” as opposed to performing the “same work,” under similar conditions must receive equal pay to another employee of a different race or sex. Also, the employer now must prove the work is not substantially similar to justify the disparity. Employers who do not pay workers of a different sex or race or ethnicity equally to other similarly-tasked employees will be deemed to be discriminating unless they are able to demonstrate that the difference in pay is based on one of four conditions: their system measured a difference in the workers’ quality or quantity of production, their seniority system, their merit system, or a bona fide factor other than sex, race or ethnicity (work history, degrees, certificates, etc).

AB 1676 was designed to prevent the effects of wage discrimination from multiplying over time by preventing salary history from becoming the main factor considered by employers in determining a new employee’s wages. A prior version of AB 1676 would have prevented employers from seeking applicants’ work history whatsoever, similar to a law recently passed in Massachusetts which makes it illegal to request compensation history unless a worker volunteers it. The California legislature last year approved a similar bill to Massachusetts law last year, but Gov. Brown ultimately vetoed it.

If you are a California employee and believe that you have been discriminated against by your employer due to your gender, sexual orientation, race, or ethnicity, find out if you may have a claim for money damages stemming from this discrimination by contacting the experienced and effective Bay Area labor and employment attorney Richard N. Koss for a consultation, on the San Francisco Peninsula at 650-722-7046, or Rand Stephens in the East Bay at 925-757-1700.