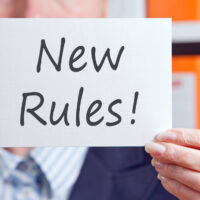 Years since originally suggesting an update to the rule, President Obama directed the Department of Labor to update its regulations governing the minimum salary which an employee must make before that employee can be exempt from being paid at 1.5 times their regular rate for working over 40 hours in a week. In order to be exempt from overtime pay under the Fair Labor Standards Act (FLSA), salaried workers will need to be paid at least $913 a week, or $47,476 annually. Not since 2004 has the threshold salary for exempt employees been raised; the threshold weekly salary has been set at $455 per week for the past eight years. The increased threshold will enter into effect on December 1, 2016.

An exempt employee must still meet other criteria based on job duties to be exempt from overtime, along with being paid on a salary basis at the new, higher rate.

The Department of Labor arrived at the increased threshold by examining census data on the wages earned by different regions of the country, and setting the threshold at the 40th percentile of salaries earned in the lowest-earning region, the South. Prior to 2004, the cutoff for exempt status had been set at $250 in the 1970s, at which time 60% of workers qualified for overtime pay. Now, experts estimate that only 7% of workers qualify to receive overtime.

Despite the fact that a below-median salary in the lowest-earning sector of the country was chosen as the benchmark on which to base the threshold salary, some representatives from large corporations have balked at the high number. Industry groups such as the National Retail Federation have expressed frustration with the one-size-fits-all approach to a threshold wage. The National Retail Federation also claims that the increased salary will be a “career killer,” and that employers will have no choice but to either lay off workers, make fewer employees salaried, or rely on freelance labor rather than pay overtime.

According to the Department of Labor, workers can expect to see an additional $1.2 billion in wages due to the change in the law, either in the form of an increased baseline salary to meet the threshold and avoid having to calculate hours worked by salaried employees, or in the form of overtime wages earned.

If you are a California employee and feel your rights to overtime have been violated or that you were misclassified as exempt from overtime, ensure that you receive the compensation you deserve for the work you’ve done by contacting Bay Area employment law attorney Richard N. Koss for a consultation on your claims, in San Francisco at 650-722-7046, and in the East Bay at 925-757-1700.