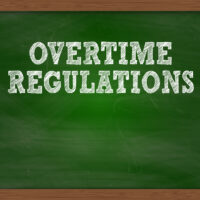 The Department of Labor changed the minimum salary for an employee to be classified as exempt under federal law. Under the change, to be paid a salary, an employee would have to earn over $913 per week ($22.83/hour). Many California employers spent recent months preparing themselves for the change to the salary requirements to classify an employee as exempt under the Fair Labor Standards Act (FLSA). This involved either offering an increase in salary to employees they wished to remain exempt to meet the new minimum of over $913 in weekly wages, or shifting employees to non-exempt status and implementing mechanisms that would allow those employees to track their hours worked. Based on a recent ruling by a Texas federal judge, this work may have all been for naught.

A group composed of both business industry groups and state government officials filed for an injunction before district court judge Amos L. Mazzant, requesting that the Department of Labor’s proposed changes to the overtime requirements be stayed until a court had the opportunity to consider the legality of the changes. Judge Mazzant granted the injunction, ruling in essence that the Department of Labor didn’t have the authority under the FLSA to implement an increase to the salary requirements for exempt classification. In his opinion, Judge Mazzant wrote, “Congress intended the EAP [executive, administrative, or professional] exemption to depend on an employee’s duties rather than an employee’s salary. Nothing in the EAP exemption indicates that Congress intended the Department [of Labor] to define and delimit with respect to a minimum salary level.”

The Department of Labor has announced that it will appeal the trial court’s decision to the Fifth Circuit Court of Appeals. Judge Mazzant’s opinion appears to some labor law experts to run afoul of court precedent stating that the Department of Labor does in fact have the right to implement minimum salary requirements. However, due to the upcoming change in presidential administration and shift in the makeup of Congress, the changed regulations could still be rejected even if the Department of Labor is successful before the Fifth Circuit. Congress could decide to reject the changed standards on a different procedural basis, or, if the Fifth Circuit does not make a decision on the case until after the inauguration, the Department of Labor could withdraw its appeal. Although we do not expect the changed standards to become effective under the new administration, whether or not employers should nevertheless implement the changed standards is still a grey area, and could depend on the size and agility of the organization. Speak with a California labor and employment attorney to determine the best course of action.