How to Prove a Case Under the Equal Pay Act 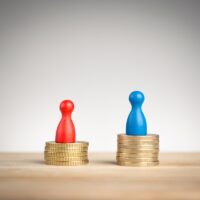 The Equal Pay Act protects employees across the United States from discrimination in pay based on gender. Under the terms of the Act, if two employees of different genders perform substantially the same job duties, they should get the same pay unless there are objective, non-gender-based reasons for the difference. An employer who pays female employees less than similarly-situated male employees is subject to liability. To learn about how to demonstrate a claim under the federal Equal Pay Act, read on. If you think you are being unfairly paid in violation of the law, reach out to a dedicated California employment discrimination lawyer for help.

Since 1963, the Equal Pay Act has prohibited discrimination in pay based on gender. An employer cannot discriminate between employees of the same “establishment” on the basis of sex by “paying wages to employees at a rate less than the rate at which the employer pays wages to employees of the opposite sex for equal work on jobs the performance of which requires equal skill, effort, and responsibility, and which are performed under similar working conditions.”

To establish a prima facie case for an Equal Pay Act violation, an employee must show the following:

The employee who is being paid more need not have the exact same job title, so long as they perform substantially the same job duties. An employee may demonstrate their claim with evidence concerning the disparate wages, as well as evidence and testimony concerning the job duties performed by each employee. Employees can bolster their claims by showing a pattern of pay discrimination, although such a pattern is not necessary. The employee need not show that the discrimination was intentional in order to recover; unintentional pay discrimination is sufficient for a claim.

Once an employee has established a prima facie case, the employer has the chance to rebut the claim by demonstrating that a gender-neutral factor explains the pay discrepancy. According to the Act, employers have four affirmative defenses: seniority; merit; quantity or quality of production; or another factor unrelated to sex.

The employer cannot merely state a legitimate reason exists. They must actually prove the differential was based on factors other than sex. Many courts require that there also be a “bona fide business reason” for the gender-neutral factor that results in the wage differential, beyond the mere existence of a neutral reason.

The plaintiff can then provide contrary evidence to rebut the validity of the “legitimate” “gender-neutral” reason for the pay disparity. Widespread pay disparities, exceptions to the claimed rule, and evidence of a discriminatory culture may all go toward showing that the pay disparity does, indeed, result from the sex of the employees and not from legitimate gender-neutral factors.

If you are a San Francisco employee or employer in need of advice or representation concerning Equal Pay Act issues, gender discrimination, retaliation, whistleblower protections, or other California labor law issues, contact the Richard Koss Bay Area employment law attorneys at 650-722-7046 on the San Francisco Peninsula, or 925-757-1700 in the East Bay.