Defamation in the Workplace: Signs It Is Happening to You 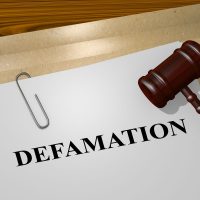 Defamation can seriously damage your professional and personal reputation. If your current or former employer says derogatory things about you, impugning your moral character or professional integrity, you can find yourself unable to get a job or without any clients willing to work with you. You might even find your personal life impacted, depending upon the nature of the accusations. Below, we discuss defamation in the workplace and what to watch out for. Call a dedicated California labor law and employment attorney with any questions or for help with an employment-related matter.

The specific requirements for libel and slander differ slightly. As a general matter, however, a plaintiff must prove the following in order to bring a claim for defamation:

In California, general (negligent) defamation of character requires the target to prove they suffered harm as a result of the conduct. In the employment context, defamation of character occurs when a company (employee, supervisor, etc.) negligently shares, disseminates or otherwise makes public untruthful and false information about someone else at the company, which ultimately causes harm to the target’s reputation, character, or career.

California also recognizes defamation per se. Defamation per se occurs when the defamatory statement is so obviously harmful on its face that the target does not need to prove actual harm. Defamation per se often might include allegations of crimes of moral turpitude or that a person has a serious sexually-transmitted disease.

Employers are also afforded a qualified privilege when making statements in job references to other prospective employers; they must have acted with actual “malice” in making a deliberately false statement.

Examples of Defamatory Conduct At Work

You may be the victim of defamation at work in a number of situations. For example:

These are just a few examples. If you find that you are the subject of extremely harmful, defamatory rumors, or if you’ve seen or heard defamatory statements about you at the workplace, talk to an experienced labor law and defamation attorney.

If you are a San Francisco employee or employer in need of advice or representation concerning equal pay violations, retaliation, whistleblower protections, workplace discrimination, or other California labor law issues, contact the Bay Area employment law attorneys Richard Koss and Rand L. Stephens at 650-722-7046 on the San Francisco Peninsula, or 925-757-1700 in the East Bay.